I have a problem with how I work in my classroom: I don't often make mistakes. I don't mean for that to sound conceited, but I generally like for people with authority to show few weaknesses and be both precise and accurate in their communication of concepts. It irks me when the principal (a former English teacher and currently moonlighting as a college professor for English education courses) writes an e-mail to the school that says something like, "We are starting this business that will be ran by..." or when our superintendent sends an e-mail to the entire district full of spelling and grammar mistakes.

I thought about it harder this past weekend, though and have come to a conclusion that this may not be the best strategy in the classroom. By limiting my own mistakes it sends a few false messages to students.

So, I am resolving to make more mistakes in my classroom. Some will be intentional; some may not be. Just today in precalculus, for example, I was trying to number our examples as we went and I put up numbers 1, 2, 3, 6, and 7, then I asked them to work through those seven problems. Those students who were paying attention got confused and corrected me. Yay!

While we're entering a new era or spelling in our culture, the debate reigns whether to join the revolution or fight for the original ways. It's a debate on which I can argue both sides and about one in which I have a hard time deciding my own position. While "kids these days" are writing things like "lol ur rong" does seem somewhat uneducated, it also gets the point across and isn't the point of language to communicate ideas? 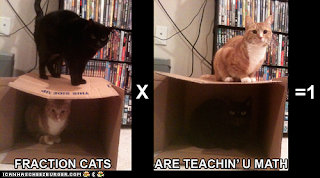 While that example may fall more squarely into the English teachers' realm, I have an internal debate about it in my own classroom, too. How important is it really that I use the words "denominator" and "numerator," when it's so much quicker (and more easily understood) to say "bottom" and "top?" When a line with negative slope is changed to get more vertical, how wrong is it for me to say that the slope gets "more negative?"

I realize that there are some words that need to be defined and used correctly so as to avoid confusion. I just finished a section of Algebra 2 where we talked extensively about the difference between permutations and combinations. The words here are important to the understanding of the logic and the formulation of the mathematical expressions needed to solve these problems.

On the flip side, though, in precalculus we are discussing vectors. What is the real difference between calling two vectors orthogonal versus just the familiar "perpendicular" word they already know? Later we introduce the term "normal" for this same concept. Do we really need three words to express the same concept? (Or are they not the same concept and I'm thinking about it incorrectly?)

So, what say you? When teaching my students math, how important is it to indoctrinate them to the traditional language of mathematics and somewhat confusing vocabulary? Is it possible to communicate some concepts using more colloquial language?