I have a 45 minute drive to school each way. So, I've been picking up audiobooks to keep me company on the drive. Many of you have suggested reading The Hunger Games, so that was my latest acquisition. The whole thing is about 11 hours, I think, so I should finish it in about a week. 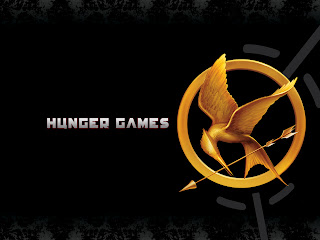 Anyways, getting through chapter one this morning, I listened to this bit:

The reaping system is unfair, with the poor getting the worst of it. You become eligible for the reaping the day you turn twelve. That year, your name is entered once. At thirteen, twice. And so on and so on until you reach the age of eighteen, the final year of eligibility, when your name goes into the pool seven times. That’s true for every citizen in all twelve districts in the entire country of Panem.

But here’s the catch. Say you are poor and starving as we were. You can opt to add your name more times in exchange for tesserae. Each tessera is worth a meager year’s supply of grain and oil for one person. You may do this for each of your family members as well. So, at the age of twelve, I had my name entered four times. Once, because I had to, and three times for tesserae for grain and oil for myself, Prim, and my mother. In fact, every year I have needed to do this. And the entries are cumulative. So now, at the age of sixteen, my name will be in the reaping twenty times. Gale, who is eighteen and has been either helping or single-handedly feeding a family of five for seven years, will have his name in forty-two times.

The Hunger Games by Suzanne Collins.
Chapter 1 as found here

Being a math teacher about to begin a unit on sequences and series in my Algebra II class (as well as a deeper study in Precalculus), I thought this would be an interesting problem to use. They are also all reading this book and seem to like it.